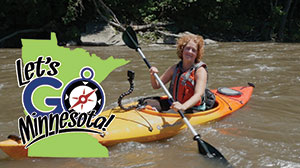 FEBRUARY 11, 2021, AUSTIN, MN — For the first time in its near 50-year history, KSMQ Public Television has produced a series that will be seen on television screens across the country. The KSMQ production Let’s Go, Minnesota! will air on Create TV every Monday at 9 a.m. and 4 p.m. for 14 weeks beginning March 1. Each episode runs 30 minutes.

“KSMQ’s Let’s Go, Minnesota! grabbed us immediately,” said Shawn Halford, Vice President of Exchange Content and Digital Services of American Public Television (APT). “With host Brenda Piekarski’s winning presence, and the unique way that the series incorporates a guest artist on each adventure around Minnesota, Let’s Go Minnesota! should inspire viewers across the country to create their own adventures.”

Create TV airs “do it yourself” type programming reaching more than 86% of US television households, with 44 million viewers annually nationwide. The network is offered by public television stations, including KSMQ Public Television, where it is seen on channel 15.3. Create TV is produced and distributed by American Public Television, WNET New York, WGBH Boston, in association with National Educational Telecommunications Association and PBS.

“Hiking to Chimney Rock”- It’s a beautiful day in Whitewater State Park, and we are hiking up, up, up to Chimney Rock for spectacular views of the valley. With wood sculptor Curtis Ingvoldstad.

“Rock Climbing at Sugar Loaf” – Get an eagle’s eye view of the Mississippi River from the top of Sugar Loaf in Winona, Minnesota. Artist Layne Noser gears up for a breathtaking ascent.

Because of its small staff size, creating Let’s Go Minnesota! was a determined two-year process for the KSMQ production team. Receiving this national attention confirms that the team vision of what makes good television was spot on.

“Having an original production series selected for national broadcast is certainly a high-water mark in the history of KSMQ Public Television,” said Eric Olson, KSMQ President & CEO. “This program will introduce a national audience to southeastern Minnesota’s natural beauty and outdoor recreational opportunities. Create TV viewers are hungry for this kind of content and we couldn’t be more pleased that they selected one of our programs.”

KSMQ Public Television is currently in discussions with Create TV to air a second season of Let’s Go Minnesota! Funding for the production of Let’s Go Minnesota! is provided by KSMQ members, local underwriters, and the State of Minnesota. To aid KSMQ Public Television with its non-commercial, nonprofit mission, viewers can become a member by logging on to the station website www.ksmq.org for more information. 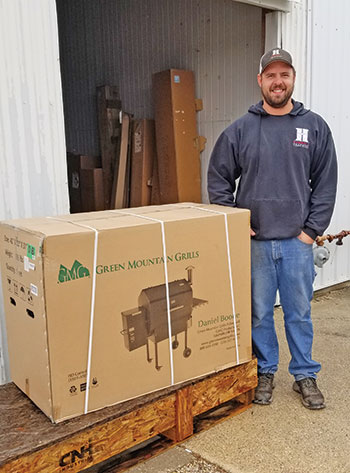 On September 30, 2020, Visit Bluff Country Magazine conducted the fifth prize giveaway drawing of the summer, which was a brand new Daniel Boone Green Mountain Grill. As the magazine celebrates 35 years as the premier tourism publication of Historic Bluff Country (a.k.a. The Driftless Area), they have been conducting prize giveaways each month from June through September. Prizes include kayaks, a Grizzly cooler, and a Green Mountain Grill.

In the 2021, Visit Bluff Country Magazine will be presenting more opportunities for bluff country travelers to win giveaways and getaways.

Go to www.visitbluffcountry.com to get ideas for staycations in Historic Bluff Country. 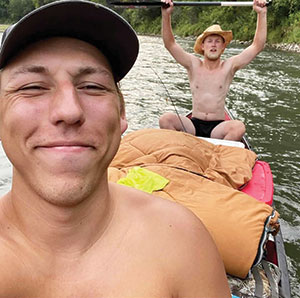 When travelers residing in Southeast Minnesota or Northeast Iowa want to go on an adventure, they don’t have to travel far.

Within Historic Bluff Country (a.k.a. The Driftless Region), one element of nature brings so many communities together. The Root River.

Throughout the summer months, locals and tourists will navigate the waterways with canoes, kayaks, and tubes. The river brings people together, near and far.

On occasion, a few courageous individuals will plan for an overnight trip on the Root River. 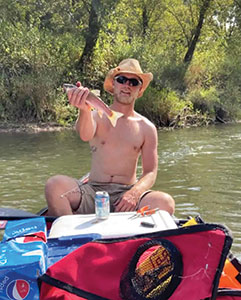 Sam Bahl, residing in Owatonna, Minn., and Matson Kiehne of Harmony, Minn., graduated with the Class of 2016 from Fillmore Central High School.

When talking about how this trip idea came together, Bahl shared, “Ever since we were kids we have always enjoyed trout fishing. We got to talking one night and started talking about doing an overnight canoe trip. Then we decided how cool would it be if we canoed from Forestville to Rushford. A trip across the county that we grew up in!”

Their mode of transportation was a canoe measuring 18 feet and three inches in length. They packed for all possible scenarios. 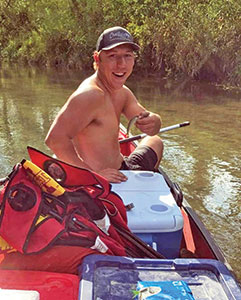 All loaded up and ready to paddle, they began their adventure.

Bahl, a life-long angler who grew up in Preston, Minn., said, “Fishing was slow to start, but once we got to the Preston area, we smoked ‘em! Preston was by far the best fishing we had the entire time. Roughly, 15 fish the first day!” 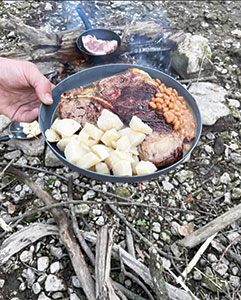 In between catching fish, they enjoyed some adult beverages, talked about life, and stopped to skip some rocks. They also enjoyed chatting others on the river – tubers, canoers, and fly fisherman. 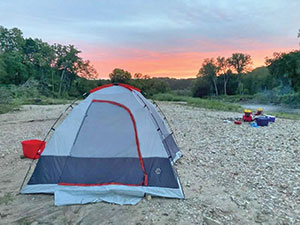 At night, they relaxed by the fire. One night, they set up their tent on an island in the middle of the river. That night, there was a downpour of three inches of rain, hail and a lightning storm. “We woke up and our island we had spent the night on became much smaller. Good thing we went to the high side of the island,” offered Bahl.

During their days on the river, they did encounter some obstacles.

“Shallow water made it difficult from Forestville to Preston, due to low water this year. So we had to get out and push multiple times, because our canoe was around 700 pounds with everything loaded, including ourselves. Big rocks near Lanesboro almost made us tip a few times. Portaging around the Lanesboro Dam was definitely a workout, but very rewarding. Near Whalan, we had to maneuver around multiple trees. In Lanesboro, we hit a large rock and we noticed our canoe was starting to leak. Before we knew it, water was up to our ankles in the canoe. We pulled over and noticed there was a small slit in the front of the canoe. We called a friend, Cody Ristau, to get us some underwater sealant. We patched it and we were on our way,” explained Bahl.

As Sam and Matson talk about this trip for many years to come, they will surely recall their brushes with wildlife.

They followed an eagle for about a mile down the river as it flew from tree to tree. And, while tailing this predator, they witnessed the eagle swoop down and grab a trout about 100 yards in front of them. They also saw a really nice eight point buck in the middle of the river. A few turkeys, lots of geese and plenty of jumping trout. At night, they were surrounded by the sounds of coyotes howling in the nearby woods – echoing off of the bluffs in multiplicity. 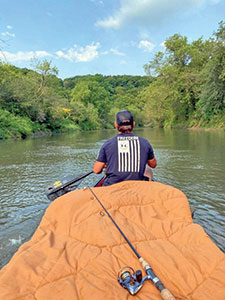 In the morning, they awoke to a jaw-dropping sunrise over the bluffs, while they stood 10 feet from the river cooking their eggs and bacon over their campfire.

They certainly didn’t starve along the way. With their bounty of freshly-hooked trout, they enjoyed filets cooked on the fire while they listened to the sounds of the Root River’s rapids flow by their campsite.

They did have suggestions for anyone attempting to make this same trip.

If they did it again, they’d bring some sealer to patch their 20-year-old canoe. They’d bring coolers with wheels to help portage to the campsite. And, chairs with a backrest to sit on in the canoe would be a must.

Bahl concluded, “Be prepared for the work. It was extremely rewarding and we will definitely do this again, but it was a lot of work from sunup to sundown!”

Kiehne and Bahl are currently planning a five-day trip up in the Boundary Waters. They are also planning a trip on the North Branch of the Root River, with hopes of making their way to Houston, Minn.

Bahl and Kiehne shared that after their trip they were “talking about how we really take for granted how beautiful Bluff Country really is, and how amazing it is. Especially by canoe!” 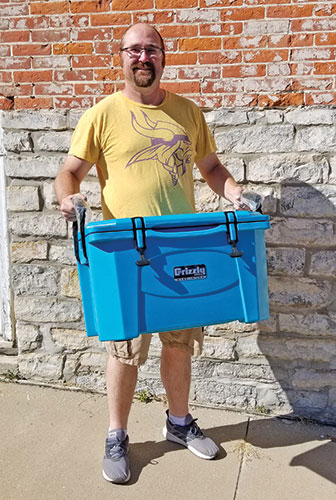 Nathan Every of Chatfield, Minn., won the brand new Grizzly Cooler 40 from a drawing held on August 31, 2020.

On August 31, 2020, Visit Bluff Country Magazine conducted the fourth prize giveaway drawing of the summer, which was a brand new Grizzly Cooler 40. As the magazine celebrates 35 years as the premier tourism publication of Historic Bluff Country (a.k.a. The Driftless Area), they have been conducting prize giveaways each month from June through September. Prizes include kayaks, a Grizzly cooler, and a Green Mountain Grill (with WiFi).

The Visit Bluff Country Magazine last drawing of the year for a brand new Green Mountain Grill will be held on September 30, 2020. Please go to www.visitbluffcountry.com/thebest to enter this drawing.

Kandice Hammel of Dorchester, Iowa, stood next to her brand new kayak that she won from a recent drawing.

On July 31, 2020, Visit Bluff Country Magazine conducted the third prize giveaway drawing of the summer, which was a brand new kayak. As the magazine celebrates 35 years as the premier tourism publication of Historic Bluff Country (a.k.a. The Driftless Area), they will be conducting prize giveaways each month from June through September. Prizes include kayaks, a Grizzly cooler, and a Green Mountain Grill (with WiFi).

The next drawing for a brand new Grizzly Cooler will be held on August 31, 2020. Please go to www.visitbluffcountry.com/thebest to enter this drawing. 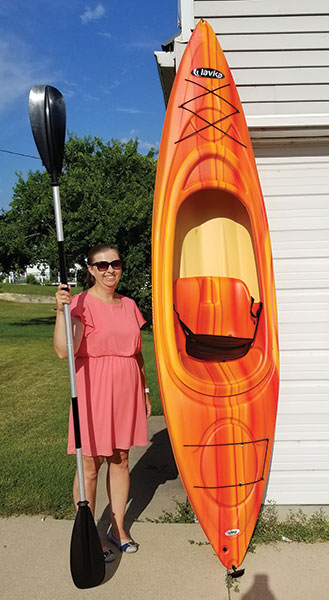 Beckie Kronebusch of Plainview, Minn., stands next to the brand new kayak that she won in a recent contest.

On June 30, 2020, Visit Bluff Country Magazine conducted the second prize giveaway drawing of the summer, which was a brand new kayak. As the magazine celebrates 35 years as the premier tourism publication of Historic Bluff Country (a.k.a. The Driftless Area), they will be conducting prize giveaways each month from June through September. Prizes include kayaks, a Grizzly cooler, and a Green Mountain Grill (with WiFi).

Elissa Johnsrud and her son Jackson, of Chatfield, Minn., won the first kayak giveaway of the summer.

The next drawing for a brand new kayak will be July 31, 2020. Please go to www.visitbluffcountry.com/thebest to enter this drawing. 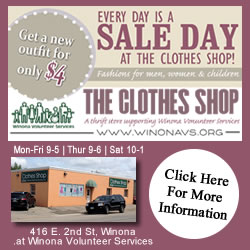